Here are my blog posts. I hope you enjoy reading them as much as I enjoyed writing them! If you have any questions about any of it then don’t hesitate to get in touch via the contact page!

That time a lion roamed into our campsite and we got charged at by a rhino.

That time we hiked all day in the rainforest to discover everything was closed (including the roads) so we were stranded in the fog.

That time we went on a mile high not so swinging bridge and set our tent up in the rain.

That time we explored Iran’s capital city and nearly got run over a number of times.

That time we drove the coast of Turkey and stopped off at the historical sites! 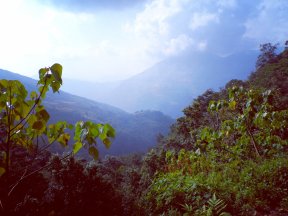 That time I went with locals up a mountain in the Himalaya to stay in the Ghalegaun community.

That time we climbed Mt. Kilimanjaro.

That time we desperately searched for a moose encounter, despite everybody else’s better judgement.

That time we sailed the Koman ferry full of people and got invited to an exclusive crew party.

That time we hiked for a day on an isolated path with all of our stuff without any water.

That time we camped through Norway climbing up and washing in ice cold fjords.

That time neither logic nor reason mattered climbing the pyramids at Teotihuacán in Mexico.

That time the guide books told us that Bulgarian wine doesn’t give you hangovers, so in the name of Science we tested that theory.

That time my sister and I took my mum on an adventure to Morocco for gorgeous sunsets, camel rides in the Sahara and a missing snake in the tourist square.

That time we stayed in the Kyrgyz yurts at Lake Issyk Kul, washed for the first time in 8 days in a glacial lake, played the local sport we named “goat ball”, and found a pregnant spider bigger than my face.

That time I saw for the first time in my life a community where men and women had equal rights.

That time we put on the clothes of the woman who was killed by a ghost, drank enough tequila to crash a wedding and explored Game of Thrones-esque landscapes.

That time when we missed out on all of our plans but had the time of our lives in Kosovo and Valbonë, Albania.

That time we broke the Uzbek law, confused a scorpion for a reptile and hiked around a crystal lake culminating in stealing a bed.

That time I went to a police state and my every move was recorded, jumped into strangers’ cars and crashed a wedding of two people I had never met, then looked into a gas crater that has been alight since the 70s!

That time I had a fabulous Airbnb host who showed me how safe Tokyo is, let me hang out with his friends and girlfriend, ending our night in plum wine and karaoke.

That time the desert was closed and guarded by police with heavy weaponry so we got a Bedouin man to smuggle us in through the back roads and we had the desert to ourselves!

That time I knowingly swam in a lake that contained a parasite called Bilharzia and clubbed with the locals introducing them to limbo and some terrible music.

That time I climbed Dune 45  in the desert, ruined my feet and tasted antelope poop.

That time we knowingly hiked after dark in bear territory, taught our local friend new drinking games and sang the night away until his dad turned up.