That time we adventured around Seville.

Seville is a beautiful city with a stunning old town, but it you want to explore more of Andalusia then I suggest hiring a car. We used Gold Car in Italy and in Spain without any issues, despite their many reviews venting about how the company is out to screw you over. With Spain being on the wrong timezone, the sun rises at about 8.30am in December, which made our drives around this part of Spain incredibly beautiful.

You might think that December is a bad time to visit, but the 18 degree days with sunshine were infinitely better than the cold rain and storm warnings that we had left behind in the UK. Also, many of the locals were quite vocal in telling us that the summer is unpleasantly hot.

Canyoning down Calzadillas waterfalls is an hour’s drive from the city centre, using Canones y Barrancos. The best advice I can give you for canyoning is to have good shoes and gloves. We had neither. The wetsuits provided kept our bodies nice and toasty but our hands and feet were pretty frozen by the end of a few hours where we continually got submerged in ice cold water.

It was great fun though; we were the only two people in the group, and only the second group to canyon this month (perhaps because of the cold mornings, but you can book an afternoon slot if you would rather). Our two certified guides, Rafa and Bernard, were very friendly and walked us up to the top of the canyon from where we were going to embark on our abseiling adventure. 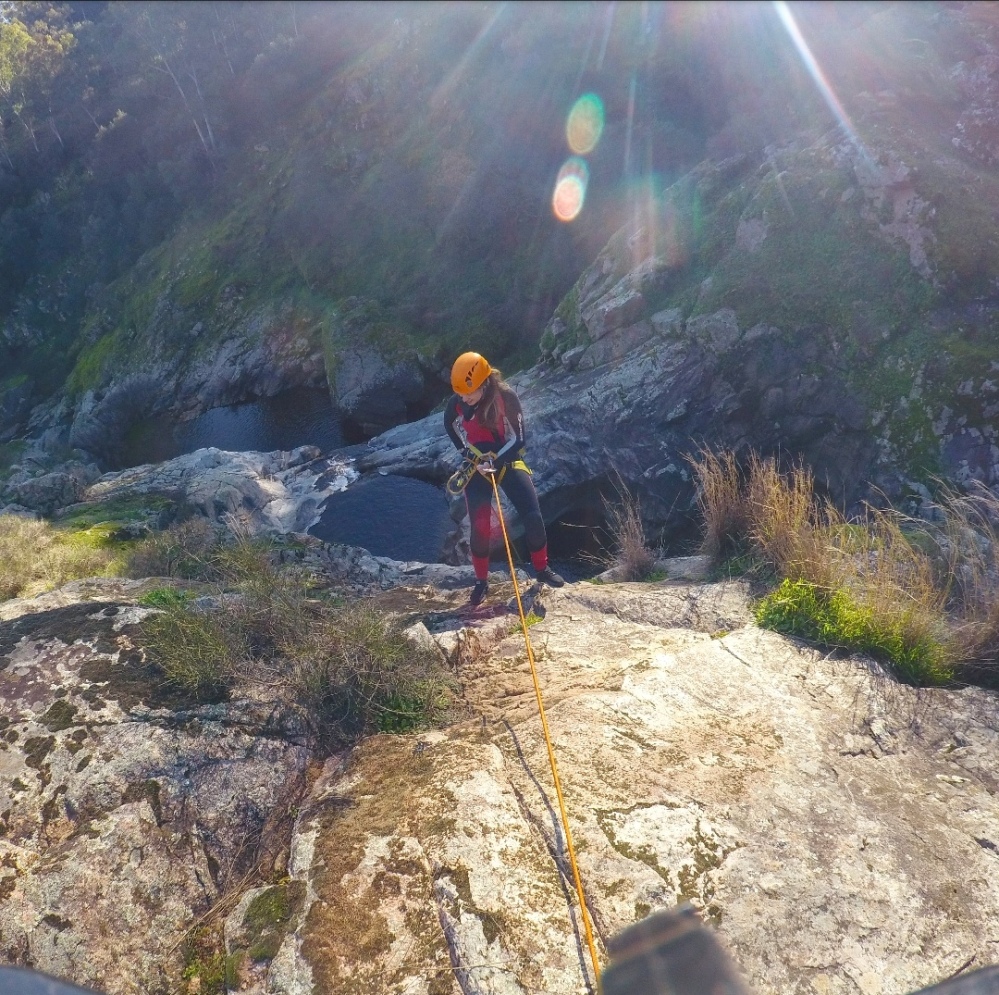 After belaying ourselves to the bottom of the cliff, we found a slippery part of the canyon that would have us slide into the water. Obviously, we did this. Twice. The first time, Martin managed to slide gracefully in and breast stroke his way to the side of the pool of water, whereas I slid in and got completely submerged. It was incredibly cold. We kept moving in an attempt to encourage blood flow to the extremities that were not encompassed by the wetsuit.

We followed the waterfalls down into more pools, canyoning our way to the bottom. On one cliff, we had a bit of a race, not that Martin knew that he was racing, which he will continue to use as an excuse for being so slow. On another cliff, we got a couple of meters from the bottom and threw ourselves off the cliff backwards into the pool, and on the last cliff, we climbed back up the canyon to jump from a rock into the water from a height of about 5 metres. And because this wasn’t enough adrenaline for us, we climbed up and jumped again.

By the end of the few hours we spent canyoning, we could not feel our feet. I don’t mean that we couldn’t feel our toes; our entire feet were numb from the cold. We were grateful for the short walk back to the vehicles to warm us up before stripping off the skin-tight wetsuits. It would have been sensible to have brought a change of shoes to put on at this point, but we hadn’t. Luckily, our Airbnb had a hairdryer!

Here’s a little video of our slides and jumps! I would really recommend Canones y Barrancos!

Day 2 was filled with adventure numero dos – to walk the “world’s most dangerous trail”. A number of trails are self-acclaimed the world’s most dangerous, and they no doubt quantify the danger on different parameters. This one is called El Caminito del Rey, literally translating to the path of the King, and is 5km long. Someone found a canyon with sheer vertical cliff faces and decided to nail wooden boards into the side of one so that people could walk through it, admiring the surroundings.

From parking, or from El Kiosko, where tour buses also drop you, there are two short walks to reach the entrance to El Caminito, one which is 1.5km, and the other which is 2.7km. We chose the latter, but both offer spectacular views of the mountains and gorges in the area.

It costs 10 EUR to enter and an extra 8 EUR if you book onto the guided tour, which is available in Spanish and English. I would advise against the tour, as the groups are very large and you can find all of the information online. We had booked onto a tour simply because standard tickets were already sold out, but we ditched it promptly and made our own way around the path.

The trail is one way, and it started by following a river, only about 30 metres above the ground on the cliff face. By the end of the trail, we estimated that we were about 50-60 metres from the ground, particularly when we walked across the precarious-looking bridge towards the end of the path. 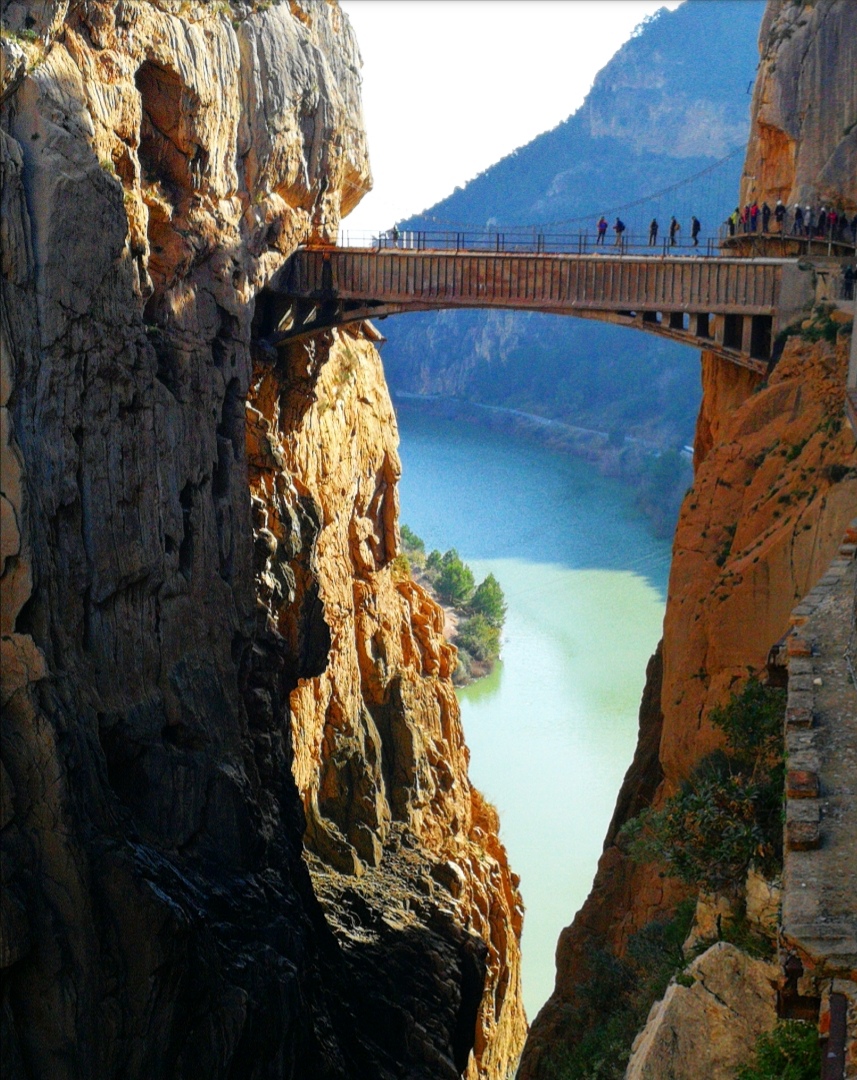 There were a few lovely picnic spots to stop for a snack or for lunch, which you are allowed to bring in with you. These were situated when the path opened up onto a hillside, where you can move out of the way of the people who choose to continue walking. I would suggest doing your own thing for lunch, as there is food available at El Kiosko but it is overpriced and feels a bit grimey.

At the end of the hike, there are shuttle buses (coaches) that transport you back to El Kiosko for 1.55 EUR, which takes about 15 minutes.

If you are driving back to Seville, make sure you stop off at the Mirador at the edge of Los Lagos. We found that it was completely covered in fallen trees so the path was initially tricky to find, but the road signs were a big help and the layby too to park the car!

Our third adventure in the surroundings of Seville, was our final day before flying home. We drove about 90 minutes to find Cascadas del Hueznar. Again, a car is needed to get here, as it is a place that is so completely off the tourist route that there are no tour companies that take you here, and it is far from public transport, but completely worth the time.

With this location put into Google maps, we followed our navigation to the falls, stumbling across a free car park at the start of the trail. A short walk down the hill brought us to a viewing platform to see the beautiful cascading waterfalls tumbling over the many rocks and obstacles, giving it some interesting shapes and waterways. As ever, we were mesmerised by the sight and stayed a little longer than most would.

The other people we saw come and go left in the same direction from whence we came, however, we spied what almost resembled a footpath, so we ducked under the barrier and continued our exploration. We later decided that this “path” was actually a waterway judging by the smooth rocks and lack of footprints. This also explained why it would disappear, having us clamber over and under fallen trees, foliage, and generally hazardous tracks in order to follow the river.

Along the river, we found many waterfalls as it coursed downhill, and at points, the tops of these seemed like the best places to cross the river. We were lucky not to fall in, and took it in turns to cross so that we could pass the passports to the person not at risk of falling in. We’re not always totally reckless.

From the car park, if you head up the hill rather than down, through someone’s backyard and continue on the path, you will reach the biggest waterfall of the lot. We only explored this pathway because we saw a small army of locals go that way (we joked that it was the whole village).

It had a turquoise pool which glistened and wavered in the sunshine, a crumbly cliff covered with spider holes, and a waterfall of a huge height gushing down over us. It was serene, and we waited here for the army to leave so that we could have the place all to ourselves.

Afterwards, we grabbed a bite from the restaurant by the car park called El Martinete (this excited Martin). We looked at the menu and were gagging for the huevos fritos con patatas fritas y chorizo with a side of salsa pimienta (fried eggs with chips and chorizo, coupled with peppercorn sauce). We were very satisfied.

On our way back to the airport, we stopped in a town called Constantina, which was very quaint with its white buildings and cobbled streets. In the centre, there were a few outside bars with many people having a Sunday beer in the sunshine, but we were more interested in El Castillo (the castle).

We drove around following the signs to the castle, somehow missing it and driving along some complete dirt track that we both doubted was even a road. This is because we missed the very blatant signage to the entrance of the castle. We saw this the third time we passed it and drove in. It is free to enter and a road takes you up to the castle, circling around the hill, with a few laybys for parking. We parked up and took our time to explore the grounds, the best thing about it being the view of not only Constantina but the surrounding landscapes.

There are also caves to explore here if you have the time, but unfortunately these were closed when we went.

If you fancy a trip to Andalusia, then I wholeheartedly recommend hiring a car and exploring a little further than to whichever city you fly, as although we immensely enjoyed tapas crawling our way around Seville’s old town, we also loved heading out of the city and seeing more of Andalusia than most tourists would.

Info: BA flights from LGW to Seville were reasonable, although Brexit might have something to say about that in the near future. Gold Car is the cheapest hire company around, and although many seem to have had a lot of problems (going by reviews), we have used them twice and have had no issues whatsoever. If you have a driver over 30, that significantly reduces the costs (and it meant that I didn’t have to drive!). 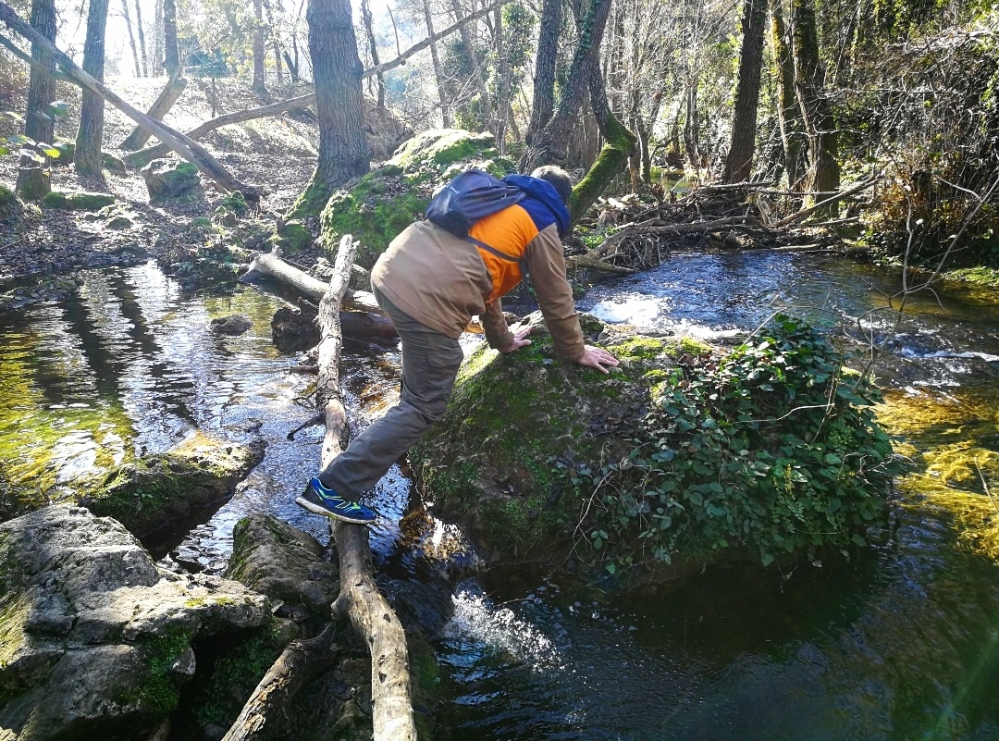 Tip of the week: Venture off the beaten track. We loved El Caminito del Rey; a huge tourist attraction with groups from Seville and Malaga travelling to complete the walk, but we loved the canyoning too, and more so the waterfall. We loved the waterfall so much because it wasn’t crowded and the two of us were messing around, crossing over fast currents and generally being dicks, This is always better when there is no audience judging you/ telling you off for doing stupid things.

Product of the week: It has to be Gold Car. It has a terrible rep from all of the people ranting on reviews on TripAdvisor and on Google, but both experiences we have had of them have been fab. Make sure you pay the extra for the super-relax cover though. For us, this cost an extra 99 EUR but this still made it cheaper than any other hire company!