That time we ran up Machu Picchu.

With whom? Martin and our hiking group. 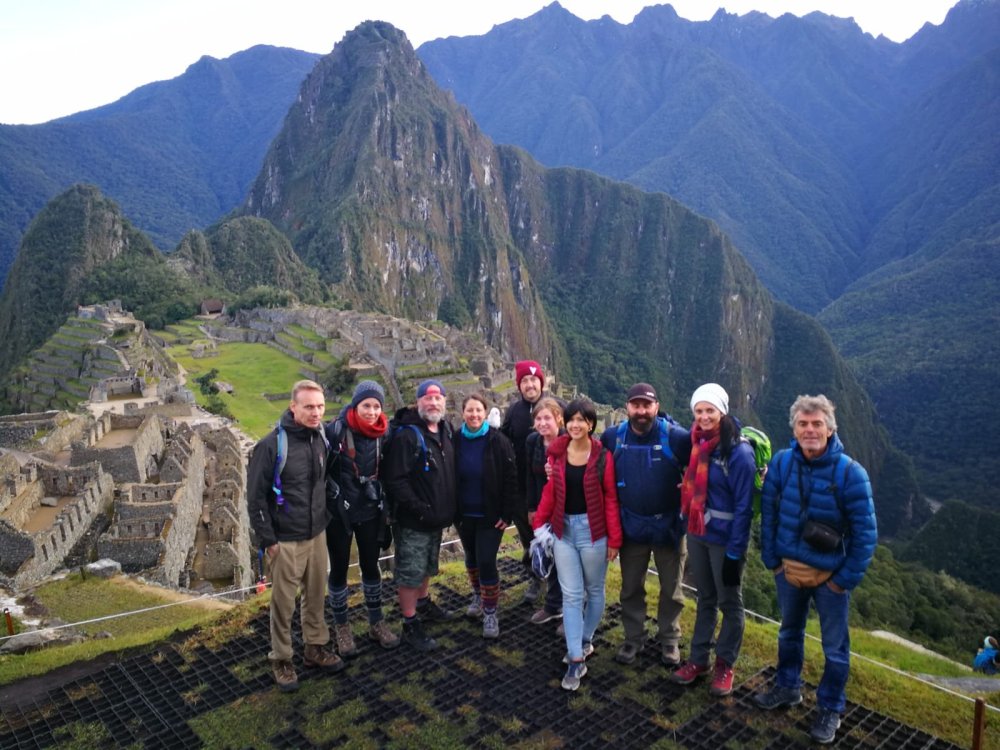 We hiked via the Salkantay Pass at 4,630m to get from Cusco to Aguas Calientes, the town at the bottom of Machu Picchu. It came into existence to make money from the tourists who wanted an early start to see the ruins, and therefore can be quite pricey so save your souvenir shopping for elsewhere. 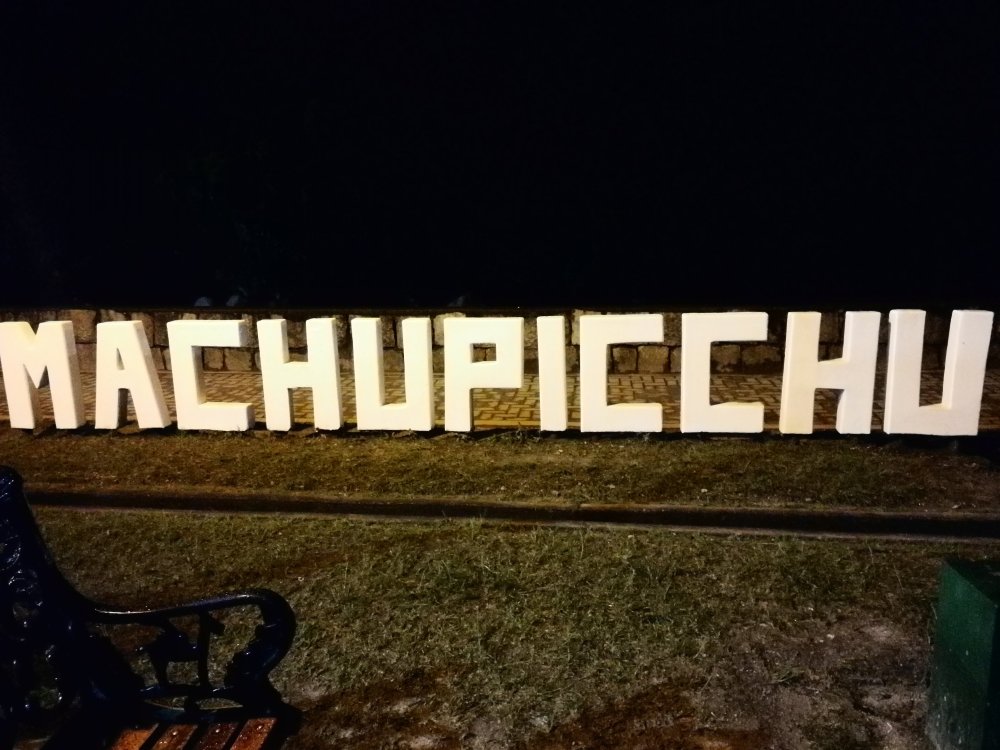 If you have a morning ticket then your options are to get the bus for 20 USD or walk for two hours to the top. There probably isn’t too much of a difference for wakeup time with these options but the rest of our friends were so up for the bus option and we were worried we might get lost walking en route in the dark, missing the first entry to the ruins, so we decided to get the bus with the rest of the group.

Our alarm went off at 3.20am and we fumbled around our hostel room for some warmish clothes, as we knew we would be waiting for a long time in the dark but also would have to carry any extra layers with us all day. The celebratory pisco sour cocktails we drank last night that seemed like such a good idea at the time didn’t help our early morning predicament.

Most tour companies tell their gringos to get in the queue for the bus at 4am, so between 3.55am and 4.05am the length of the queue increases tenfold. We were in line from 3.30am and that still had us on the second bus up, not the first. It was cold as we waited for the bus for over an hour, groggily munching away on our bland sandwich for breakfast. 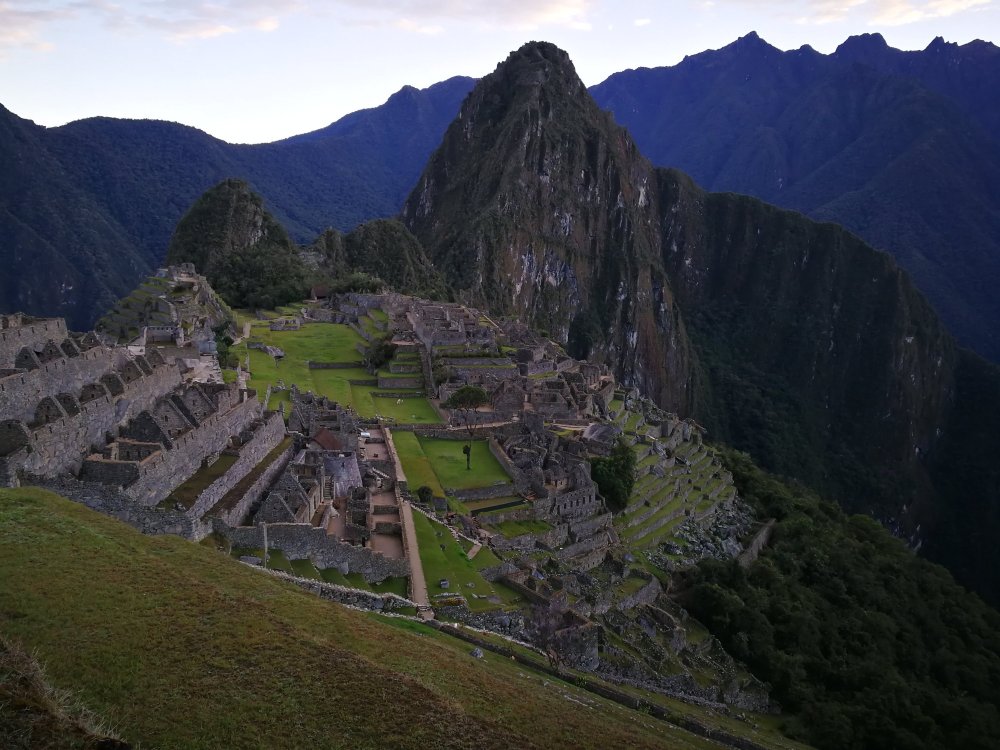 Once our ride up finally arrived, we had more waiting time at the top for Machu Picchu to open at 6am. By this point, the sunlight was filtering through the crevices in the surrounding mountains, filling the sky and our first glimpse of Machu Picchu with the morning hues.

At 6am on the dot, the gates opened and staff checked tickets and allowed people entry. We walked quickly along a path, which opened up onto that iconic view of Machu Picchu with the ruins at the base of Huayna Picchu mountain. We had all seen so many photos of this exact view and being there in person did not disappoint.

Our hiking guide, Romiro, gave us a tour of the ruins that lasted until 9am, showing us the sewage system, where the incas went to worship and the hierarchy according to where people lived!

All over the site were llamas and alpacas, minding their own business and grazing away on the grass. That is, until one approached us and tried to kiss me. Warning: llamas spit when you get too close.

We said our goodbyes to Romiro and embarked on whichever mountain we had prebooked to climb. Climbing a mountain is not compulsory, but if you do climb, there are two options: Huayna Picchu Mountain and Machu Picchu Mountain. The former is the one in all of the pictures and takes about 1hour 30 minutes to climb up and down, and the latter is the mountain after which the site is named takes 3 hours for a round trip, if we walk fast, Romiro warned us. Martin and I decided that we were up for the tougher climb, whereas most of our group fancied the shorter one. He and I and our Taiwanese friend Audrey swiftly left for the start of Machu Picchu, as we only had three hours left on our ticket in the site! 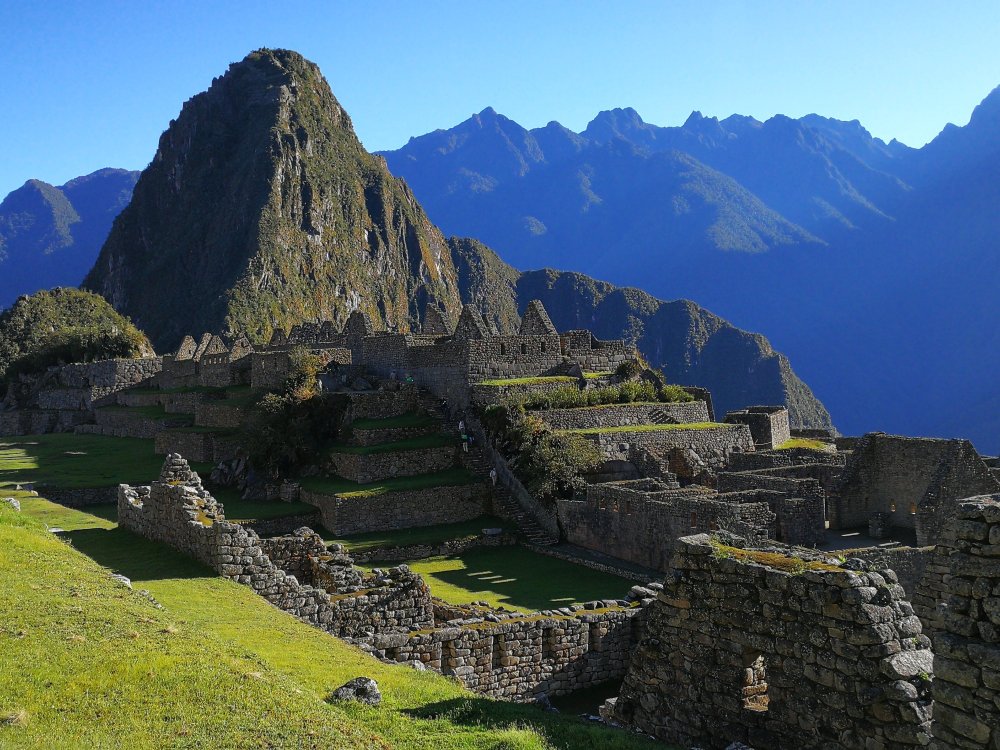 We climbed some steps, taking us around the mountain and towards the other side of the ruins, but after half an hour of constant steps we started to question why nobody had checked our tickets, as each mountain costs more money than the ticket to the ruins. We asked a few people where the path takes us and not many tourists knew, so we continued for a further 10 minutes up more steps. We found somebody else’s tour guide and asked her where we were, who giggled and told us we were almost at the sungate. The sungate is from where the Inca Trail leads into Machu Picchu and is far from the start of the trail up the mountain.

Conscious of time, we ran back down these steps towards where our giggly guide friend had told us was the mountain entrance, taking only ten minutes to cover the distance we had made. Panting out of breath, because of the altitude, we told ourselves, we joined a queue with a big sign that said Machu Picchu Mountain.

The queue was long and slow moving, with its components asking the disheveled-looking hikers on their way out whether the hike was hard. Unanimous yeses. The system felt like a one in, one out job, reminding us of our youths waiting for club entry. We knew that the entrance closed at 10am, which we were fast approaching, giving us two hours to do what most people do in over three. Thankfully, we made the cut and weren’t turned away, and once we were in, we had to sign outlr lives away and write down our start time (9.57am).

More steps. Never ending steps. It started off nicely with small wide steps, quite far apart, so they were almost unnoticeable on the uphill climb, but gradually they got higher and closer together, until we rounded a corner to face what looked like a vertical wall. The steps were so close together that you could only place the ball of your foot on it, and the next one would be above knee height. It was exhausting, and the toughest day hiking yet, at times on our hands and knees, despite our Salkantay mountain climb up to 4,630m. 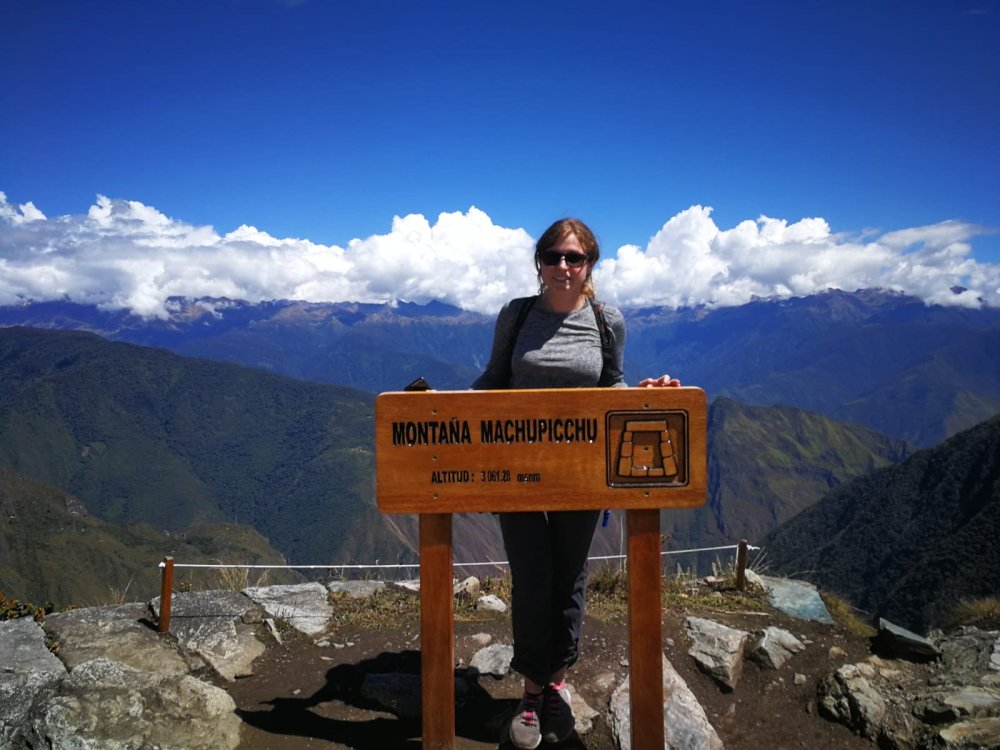 People on their way down gave us conflicting words of encouragement, such as “45 minutes to go” and “15 minutes left!”. We decided that this was actually unhelpful, and we resented all these well-intended comments and the people from whence they came.

We rounded a final corner and saw the mirador that lies at the top. Breathing a sigh of relief, the three of us took as many photos as we could of the stunning views. On one side we had the Machu Picchu ruins, now framed with the mountain range behind it that we couldn’t see from below, and on the other side we had a great view of Salkantay Mountain and all its neighbouring peaks. It was beautiful.

Now to get out by 12pm. We were already on the mountain but we had a train to catch from Aguas Calientes, and we needed to go back to the hostel first to grab our bags. So we ran. We ran down the mountain with precariously placed steps, trying to ignore the immediate peril of the cliffs passing us by next to the narrow paths that we hurled ourselves down. 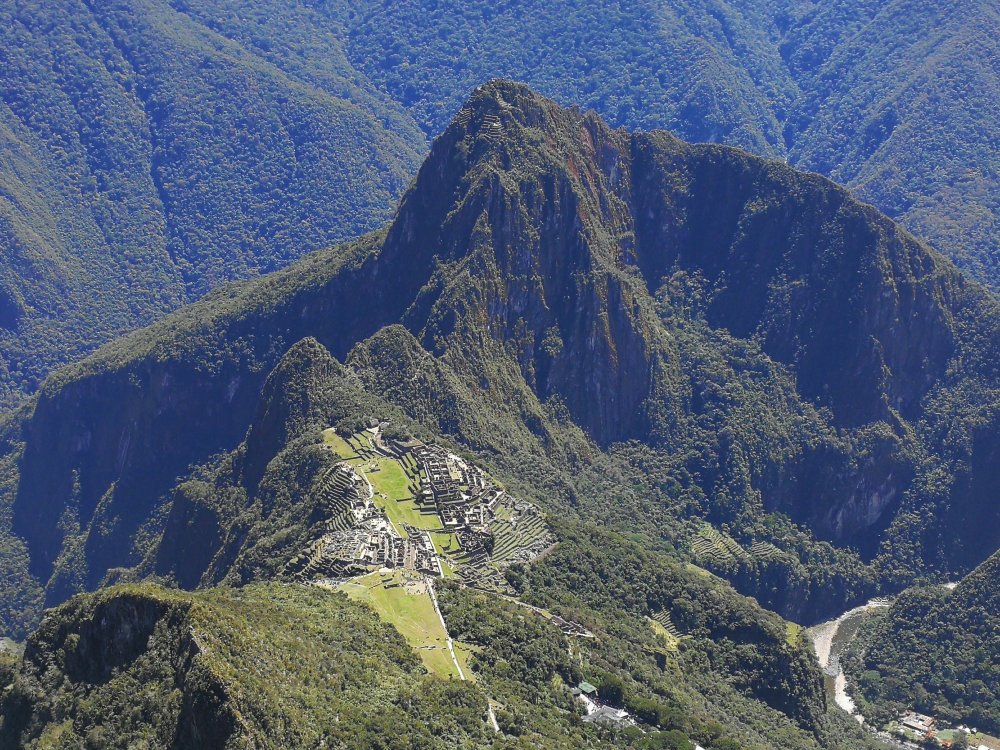 We passed many tourists whom we had overtaken on our way up, faces full of despair meets incredulity as we flew past them. It was a tough climb and some people weren’t physically prepared for it, whilst others simply weren’t prepared (I gave my water to a family who didn’t have any!).

We did it! We got down and signed out at 11.59am, a sub two hour run of which we were quite chuffed. No time to celebrate though, now we needed to get back down with a queue for the bus that spiralled in on itself because it was so long, and we wanted to get a stamp in our passport. Audrey and I left Martin in the queue to find the stamping terminal, but we had to go back in to the site to get it. Our tickets were no longer valid, so we had to sneak in through the exit. Nobody said anything to us but we could tell some of them thought about it. Usually I wouldn’t want to waste precious space in my passport but I had recently purchased a 48 page one as my last had run out of space, and I had learned the hard way that renewing your passport regularly might actually be a good idea.

If you were wondering, we made our train and even had time to grab a sandwich for lunch. It was a very fancy train, way comfier than anything I’ve experienced in the UK and we got brought a few snacks. It took us all the way to Ollantaytambo from where we jumped in a bus back to Cusco to celebrate our accomplishment with our hiking group at a restaurant called La Bodega. It had a delicious bacon filled carbonara and a not so delish kiwi on a pizza…

Info: The best way to get to Machu Picchu is definitely to hike, as getting the train is more expensive but it means you can do it in a day if you are pushed for time. I would recommend Salkantay Trekking as the hiking company, although if you are looking for cheap then check out Machu Picchu Reservations. 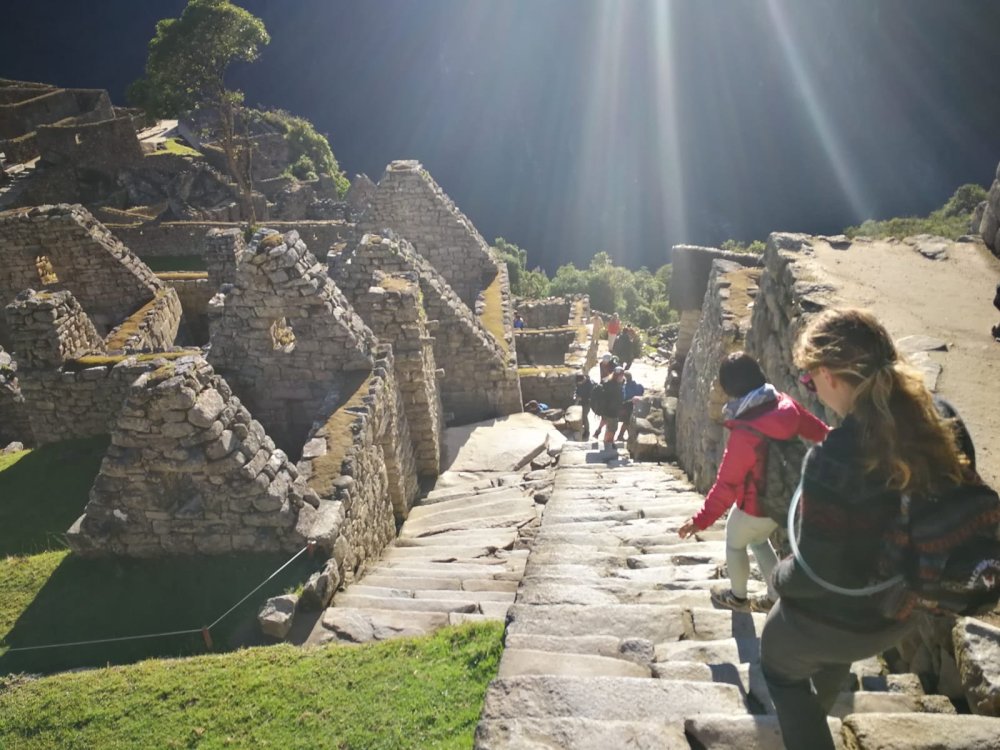 There are two slots for tickets into Machu Picchu, a morning ticket which allows you in the site from 6am to midday, and the afternoon tickets which is midday to 6pm, when the site closes. In theory, you get the same amount of exploring time in each, but each slot has its perks. The morning, if you get there early enough, means you get an empty Machu Picchu and it feels like you’re the only people there. It is also more likely to rain in the afternoon, but you can watch the sun set over the ruins. 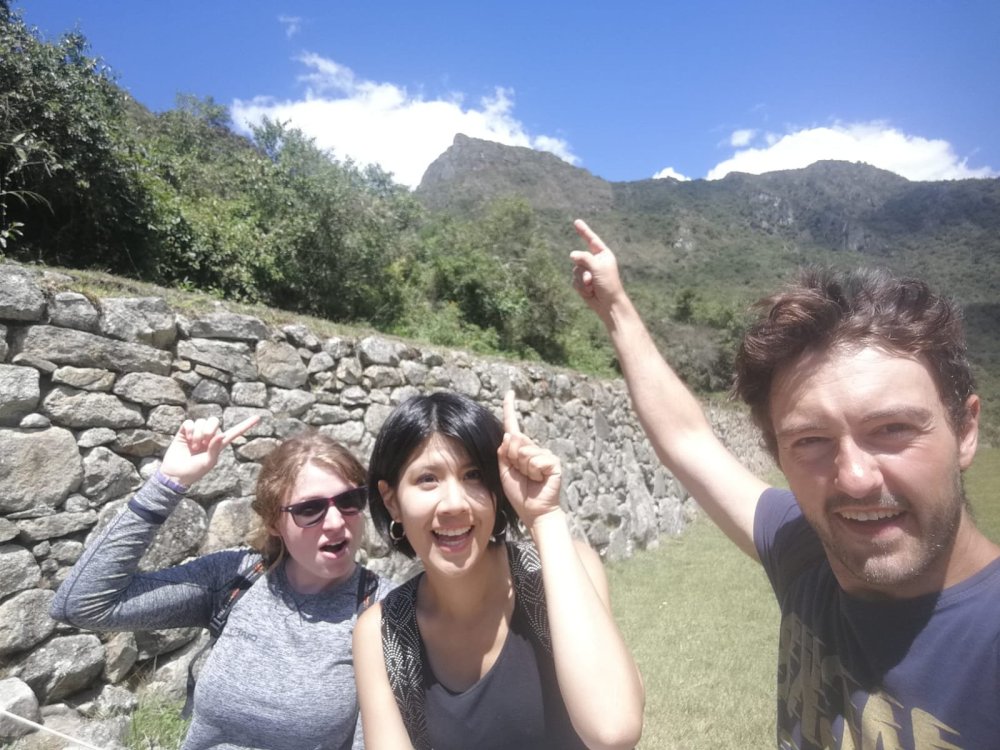 Product of the week: A guide. We had the same guide, Romiro, from our hike to Machu Picchu, but there are lots offering their services outside the entrance. I am sure you will be able to haggle and remember to budget in a tip. We learned so much about the Incas and the ruins with a short tour that we wouldn’t have known otherwise. The guides also know a little bit about where the best views are, where fewer tourists go, and where to find llamas. When you are restricted by a 6 hour ticket slot, a guide is definitely worth it. 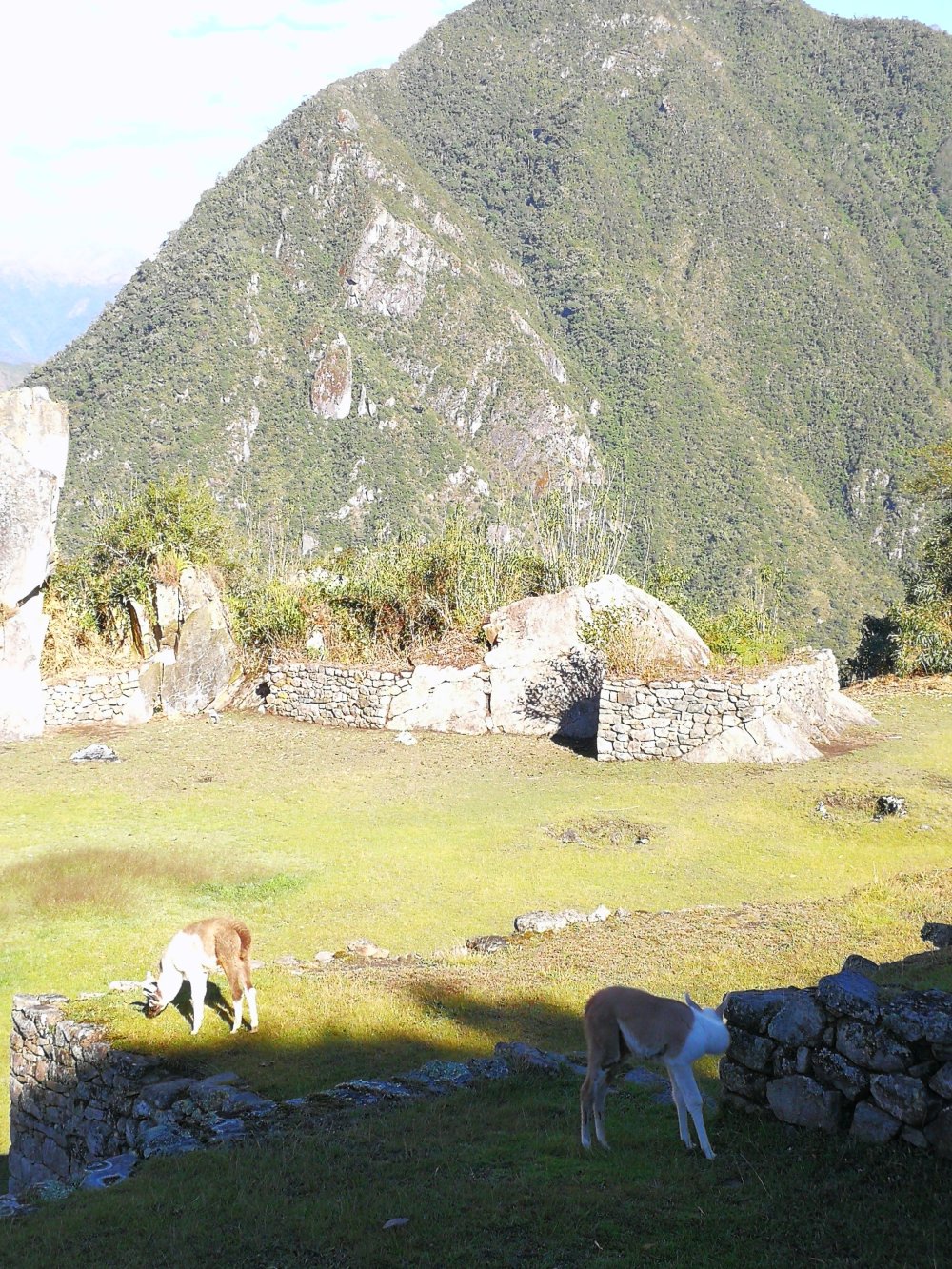 Tip of the week: Take more time to ensure you are going the right way than to rush and go the wrong way. When in a rush, we can miss important information or very obvious signs, in this case ending up with us spending 50 minutes trying to find the entrance to our hike! 50 minutes that would have made the hike much more enjoyable too.