That time we became “hopsters”.

Where? Cusco to La Paz.

Our plan was to go from Cusco, Peru to La Paz, Bolivia, via Lake Titicaca, which sits across the Peru-Bolivia border. It claims itself as the highest navigable lake in the world. We wanted to see Puno, the lake town on the Peruvian side, and Copacabana, Bolivia’s equivalent but we’re conscious of time, so spending a night in each wasn’t an option. The local bus only departs once a day, so that was not our friend, but then we came across Bolivia Hop, a tourist bus company that gets you from Cusco to La Paz in 24 hours with sight seeing stops in all the right places.

Bolivia Hop is a company aimed at tourists, so it is more expensive than the local bus, but it fit perfectly with our needs and timings. It left Cusco at 10pm, arrived on the shores of Lake Titicaca at Puno at 6am the following morning and stops there for a few hours. The bus conductor then holds your hand for the border crossing and drives to the beach town of Copacabana for a 4-hour stop, before driving onwards to arrive in La Paz at 10pm. Ideal. At each stop, the company offers tours for 10 USD.

Our first stop at Puno saw a bus load of bleary-eyed tourists having caught varying degrees of sleep on the bus, stumbling into the only open cafe for breakfast. We decided to take the tour; a visit to the floating islands. Puno is famed for its floating islands made of reeds that move around the lake. We clambered aboard a boat at the pier for about 25 minutes until we reached a community of floating islands. We docked at one and jumped off to be greeted by the local island inhabitants. Everything on the island was made from reeds, apart from the solar panels on each roof. The houses, beds, benches, boats, and even some clothes were all made from the same stuff as the island. While the island felt pretty stable we still had to be wary of where to walk so not to end up with wet, and incredibly cold feet. 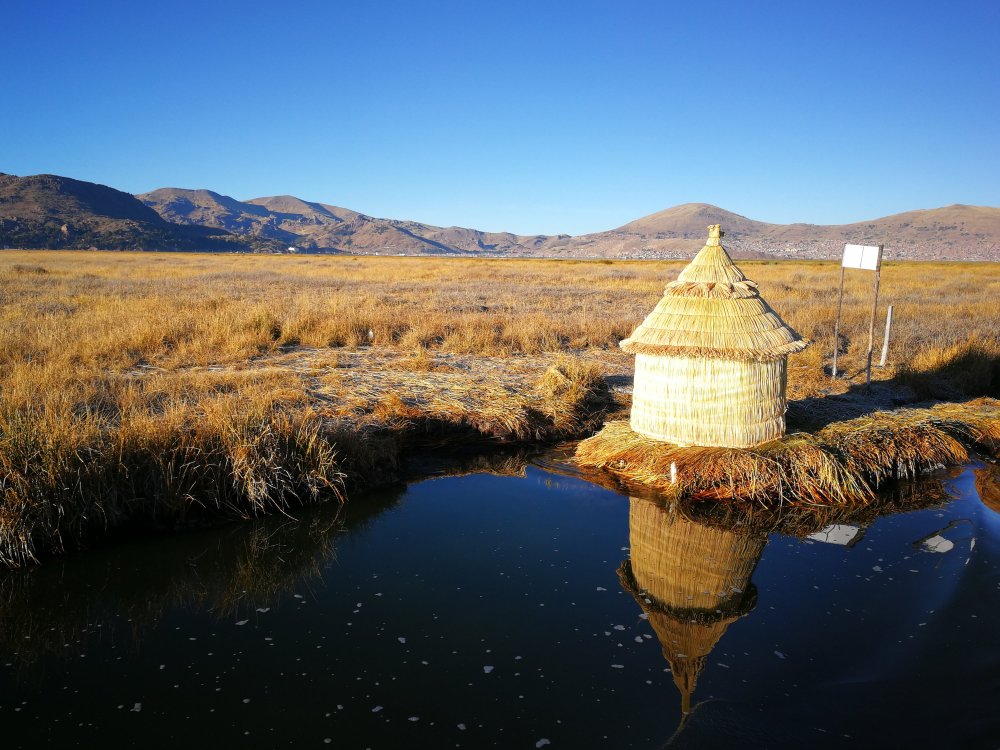 After a brief talk about how the floating island floats and island life, we were shown around the small area and the inside of a few houses. The standard plea to buy the “homemade” souvenirs ensued and we were given more than enough time to peruse the wares and explore the island. Note to reader, you can get all the same stuff cheaper in other areas around Lake Titicaca and indeed South America. Martin and I have become convinced there is one supplier of homemade souvenirs for the entire continent, and they are making an absolute killing. 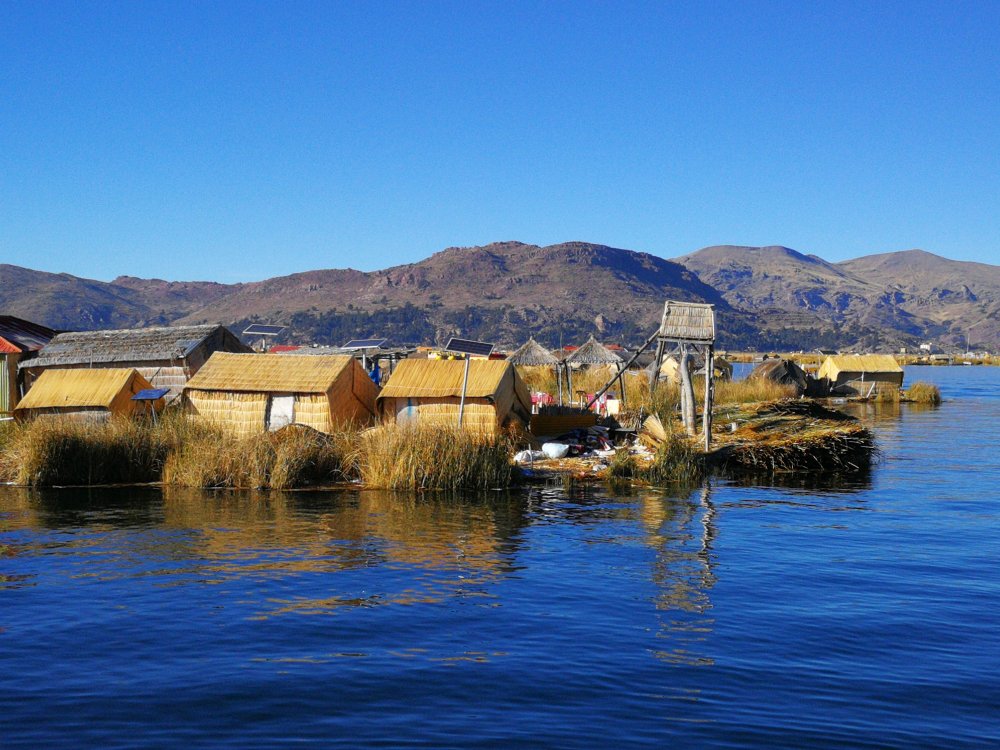 We were then all ushered rather forcefully aboard a banana-shaped reed boat which we all thought was was part of the tour, as it turns out, it wasn’t. They they push the banana boat between islands with a speedboat and come round charging you a hidden fee of 10 soles, which seeing as you’re on their boat in the middle of Lake Titicaca you kind of have to pay. At this point, Martin and I had met some other Brits who had sensibly spent their soles as we were about to cross the border. Thus made paying the boat fee a bit of an issue for them as they handed over a few soles, a couple of dollars and a 50p piece. It all felt a little touristy and a bit of a money trap. Don’t get me wrong it’s absolutely worth doing, the floating islands are amazing and an utterly unique thing to do that is well worth exploring, though our initial joke about how these people probably have big houses on the mainland but drive out to the islands each morning to greet the tourists, is probably quite accurate.

The border crossing was relatively pain free, although the toilets charge you in Bolivianos (the Bolivian currency), yet there are no ATMs nor money exchange places. Go figure.

Copacabana is close to the border, so it was a short drive. There aren’t huge amounts to do here other than eating and drinking, so we decided to jump on the bandwagon for the second 10 USD tour too. This involved another boat trip to a more permanent island called Isla del Sol. We had read that this island is very beautiful, but it is about an hour’s boat ride from Copacabana. We had just enough time to find an ATM and get some grub, and we had a delicious Thai curry as our first meal in Bolivia. Authentic. 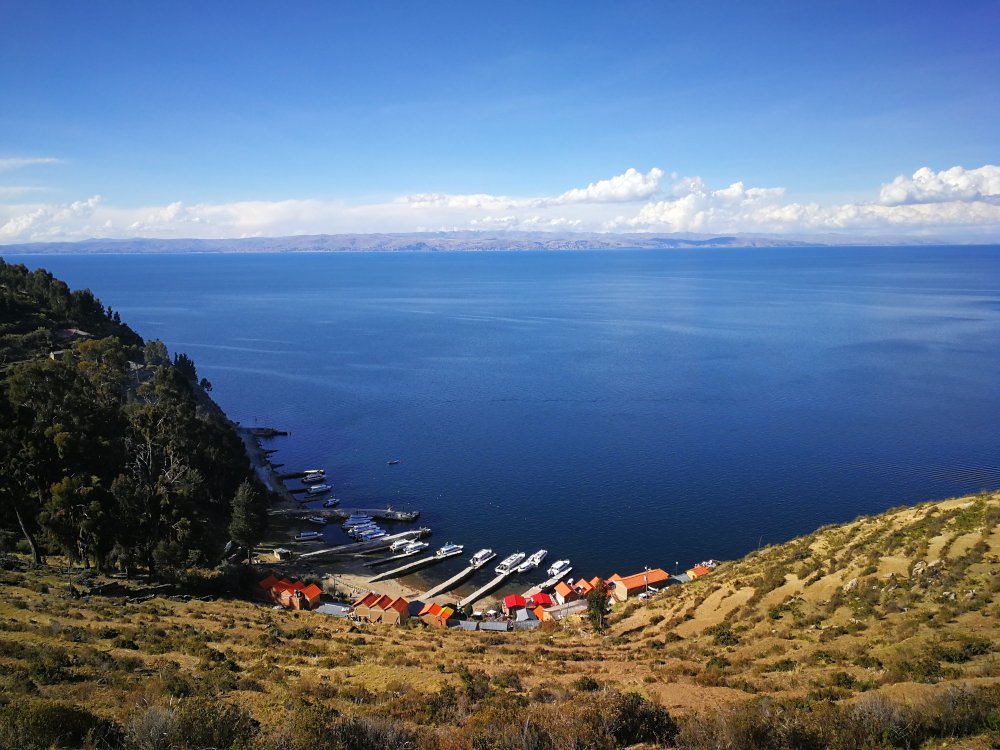 Isla del Sol has a sun temple, some toilets, shops, and a few hostels but otherwise has been left alone. This makes for a very beautiful hike around the island. The boat dropped us by the sun temple and met us on the opposite side of the island, giving us almost enough time to take a leisurely stroll. It is uphill for half an hour, then downhill for about 15 minutes. 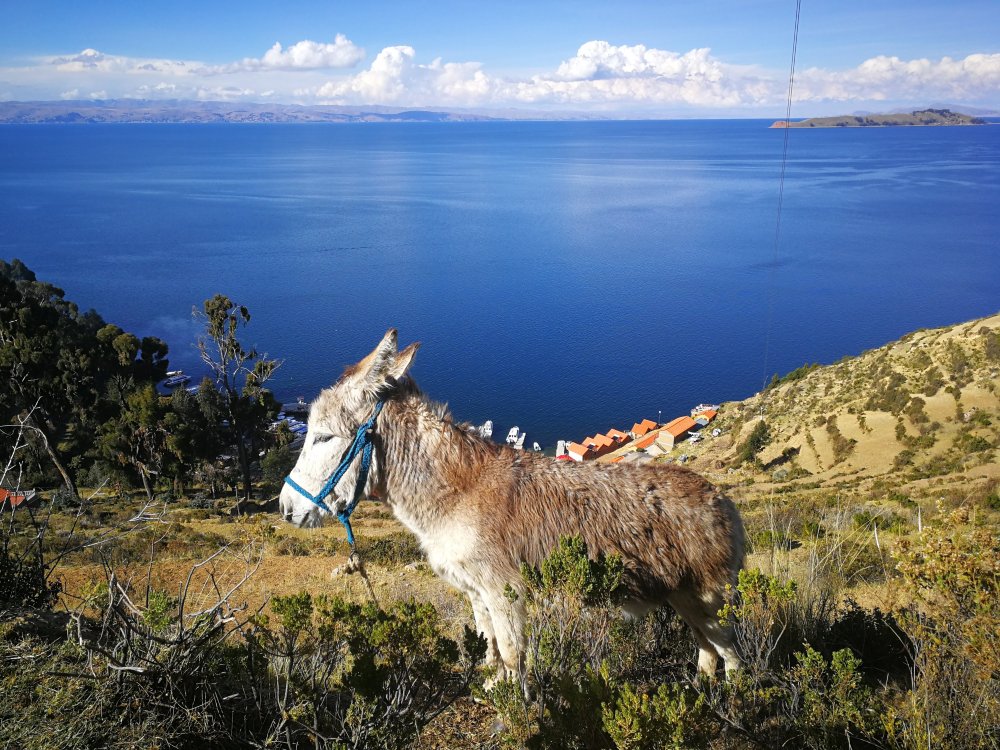 Aside from the vistas of the lake, we also had the pleasure of meeting an alpaca. I have discovered through my travels of this part of the world that llamas make me happy, and the same can be said of alpacas. They look so silly and that makes me laugh. This alpaca was accompanied by a cheeky looking young girl. She knew she had the cutest alpaca and was clearly making a killing from charging the tourists she charged to get photos with it. We gave her some money, and she somehow managed to persuade Martin to give her some water too (I was too busy laughing at the alpaca by this point).

Martin and I were the first of our boat load to finish the hike, but we didn’t feel as though we had rushed it. We skimmed rocks as we waited for the other components of our group before setting sail back to Copacabana.

Our next journey leg weaved through mountains and valleys on our way to our final stop, and included one last boat journey. The people were separated from the vehicle and placed on a much faster vessel.

We looked over towards the coach to see it driving onto a small flat raft with a surface area only slightly bigger than the base of the coach. We watched in amazement as this flimsy looking driftwood transported a coach with all of our backpacks on it across the lake.

As it was now dark when we were reunited with our bus, we were given the option of Black Panther or Deadpool 2. The consensus was the latter and it was an okay film; I was more excited by the free popcorn.

Info: the bus departs from the terminal in Cusco but drops you off at individual hostels once in La Paz, so make sure you have one booked and an address as it is very late when you arrive, so run the risk of not finding a bed. It cost us 59 USD for the journey plus 10 at Puno and 10 at Copacabana. This is definitely not the cheapest way to do the journey but with the stops we wanted to make, it is certainly the fastest. If you decide that you want to spend the night in either of these places, you can hop back on the bus the following day. I would not recommend staying in Puno. There are plenty of home stays available on hostelworld and Airbnb but we saw people doing this, they arrived at 6.30am and were sat in a very cold and damp reed house on a reed island with not much to do. Some tourists stay in Isla del Sol, which is beautiful but also very cold. Few stay in Copacabana although there are accommodation options.

Peru hop and Bolivia hop are the same company. Peru hop takes the route between Lima and Cusco, hitting up places like Arequipa and Huacachina, which genuinely look amazing but we were lacking the time. This system is a great way to meet other backpackers too; we met a group of Brits that we partied hard with in La Paz the following evening.

Product of the week: Bolivia Hop, obviously. You get given a festivals tyke wristband which gets you discounts at chosen restaurants (our Thai lunch) and your companies.

Tip of the week: Netflix allows you to download of a show so that you can watch them offline. This has proven to be amazing when we are on a night bus and can’t sleep. Download a bunch overnight using your hostel’s WiFi so that you are super prepared for any bus journey where you can’t see out of window.