That time we spent two days in paradise.

Great. We lost the semifinal. It doesn’t matter though because France. They would have won in the final and we were super proud of our boys for getting as far as they did. 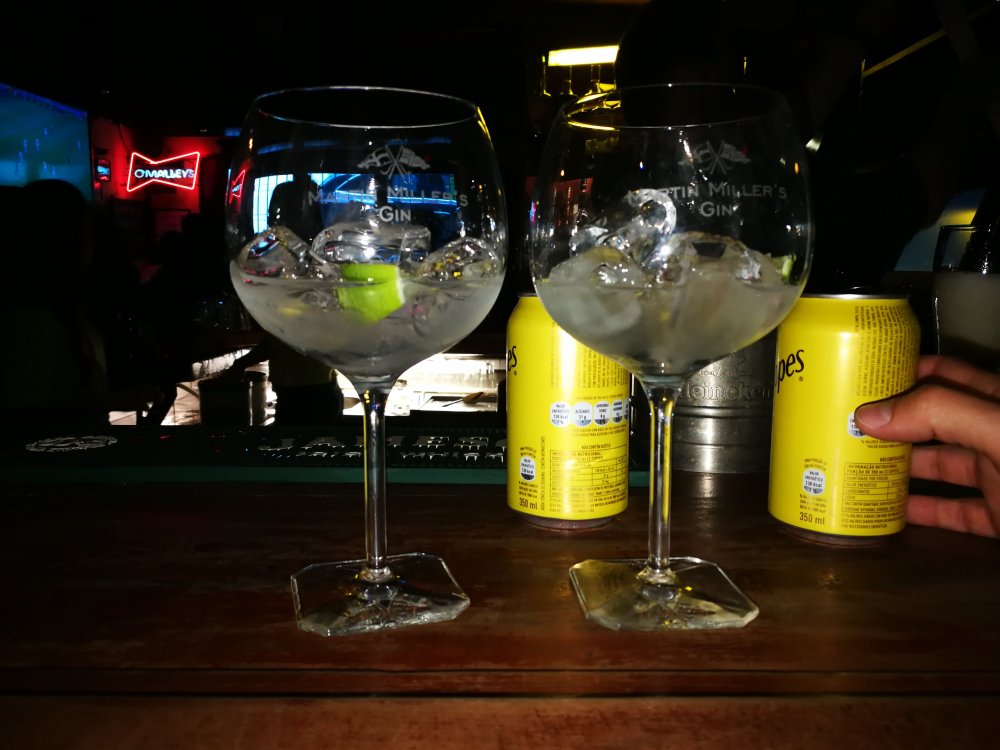 We started our day with a small headache from the generous amount of gin that O’malleys serve in their g&ts when we watched the football in Sao Paulo. From Tiete bus terminal we discovered that our bus was broken and we were delayed a minimum of 45 minutes. This was not good news for anyone, but not for us because we wanted to catch a ferry from Angra Dois Reis to Ilha Grande and the internet says the last one is at 6pm. Our bus was due in at 16.10 but our South American bus journeys so far have not failed to take more than two hours longer than the alloted time (although so far have been a much longer distance than Sao Paulo to Angra).

Each stop made us more frustrated than the last, although I did enjoy the guinea pigs and the occasional opportunity to use the loo. At 17.50 we frantically ubered from the Rodoviária (long distance bus station) to the ferry terminal to find that the ferries run every half an hour until 18.30. Well that is very different to what the internet said and it meant that we even had time to grab a quick beer before we left! A RIB rocked up to take us across and it was hardly what I would call a ferry but it did the trick.

We arrived on the Island after dark, as the sun sets very early here compared to our British summers, and we both immediately fell in love with it. The main town, Abraao, is situated on a beach, and what was nice about the welcome was the vibe that hits you as soon as you set foot on it. The town really wasn’t very big; you could walk from end to end in under 30 minutes. All along the beach front little restaurants spilled out into the sand, each lit up with fairy lights in the trees or candles on wooden tables. It was such a romantic place without feeling like you needed a partner to be there. Some of the restaurants had live music playing; within ten minutes of being there we had passed a chap playing an acoustic guitar and singing in Spanish, a group of children all playing steel pans practicing for the upcoming festival, and a woman with backing musicians playing very chilled music. Our favourite thing bout the island was that there are no cars! No traffic, no uber, no petrol fumes: Paradise. We found our hostel, Che Legarta, and dumped our stuff in our comfortable rooms. We had an en suite (score!) and two friendly French roommates. We went back into town to explore and see what there was to offer, and despite it being the evening, most places were still open. We had an idea of the hikes that we wanted to do around the island but we were peering into tour agencies, not because we wanted a guide, but to see whether we had missed anything out of our plans. It turned out we had. We passed a board titled “Sunrise Pioneers”, which offered a night hike to the Parrot’s Peak to watch the sunrise from the top. Parrot’s Peak is the highest point on Ilha Grande and named such because it supposedly resembles a parrot. Personally, I think it looks more like a lion.

This sunrise pioneer venture had certainly caught our attention and we were eager to learn more but the shop was closed. A night hike is not something I would recommend doing without a guide. It’s one thing doing trails in the daylight when you can see but to hike up a mountain at night without knowing the trails, the wildlife, or the way is a bad plan. We figured one of the open travel companies would offer a similar deal so we continued exploring until we found a small curly-haired man who insisted we go with Sunrise Pioneers because they are the best on the island. At that moment, another man walked past and opened the closed shop. Get in! This man was called Martin as well and told us that he was going tonight but not tomorrow night so did we want to come. Well yes, this has our names written all over it. Island Martin told us that we need to meet here at 2am with water, warm clothes for the top, good shoes, and maybe some food. As we made this decision I looked at my Martin and said “If we ware doing this we are going to bed right now.”

A 1.30am alarm is the most depressing thing, but we allowed ourselves 15 minutes to dress, deodorise and brush our teeth and 15 minutes to walk to island Martin’s shop. What was more depressing than a few hours of broken sleep and an early alarm was people were still out from the night before, and many of them weren’t even making their way to bed for the night but to another bar! At the shop we met the group. We had a French couple, two French lads, an Argentinian couple, a Norwegian, a South African and an American. Island Martin had already learned all of our names and handed us each a bamboo walking stick and a head torch, advising us to wear the head torch around our necks as it lights the trail better. Nice tip. 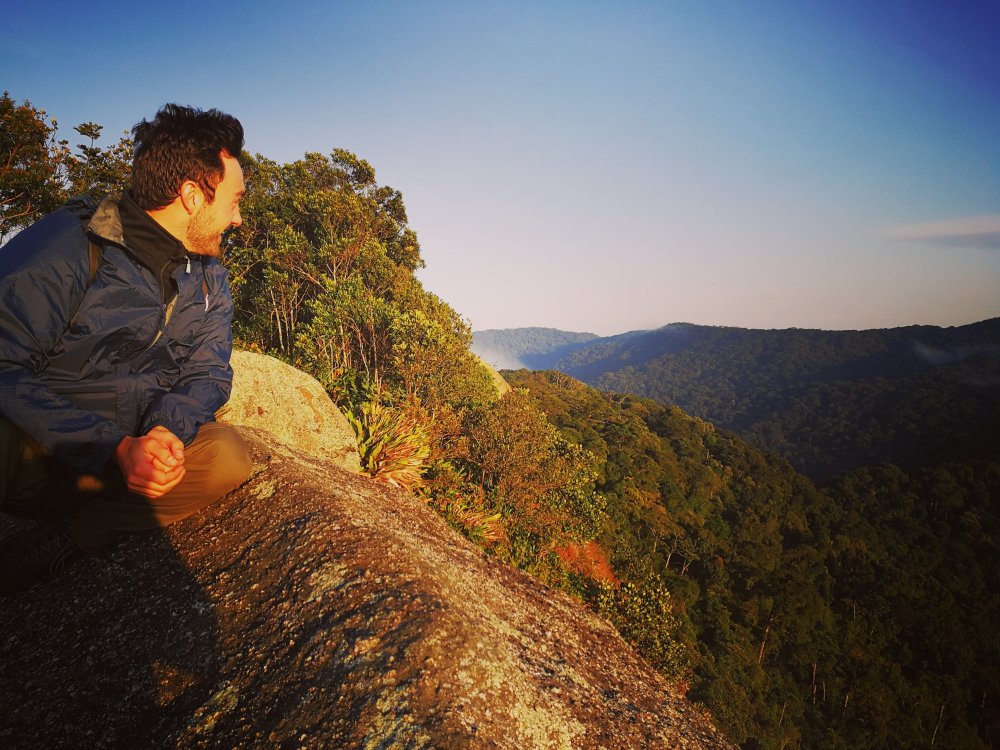 Our hike was in total darkness other than thirteen head torches. We walked in single file through the “shortcuts” that island Martin knew because he had done the trail so many times, and as we waited for the group to concatenate, island Martin would tell us to turn our lights off and listen to the sounds of the jungle. We could hear crickets, loads of insects, bird calls, and the waves lapping up on the beach. With the lights off we could see tiny green lights from the many fireflies surrounding us. It was almost magical. 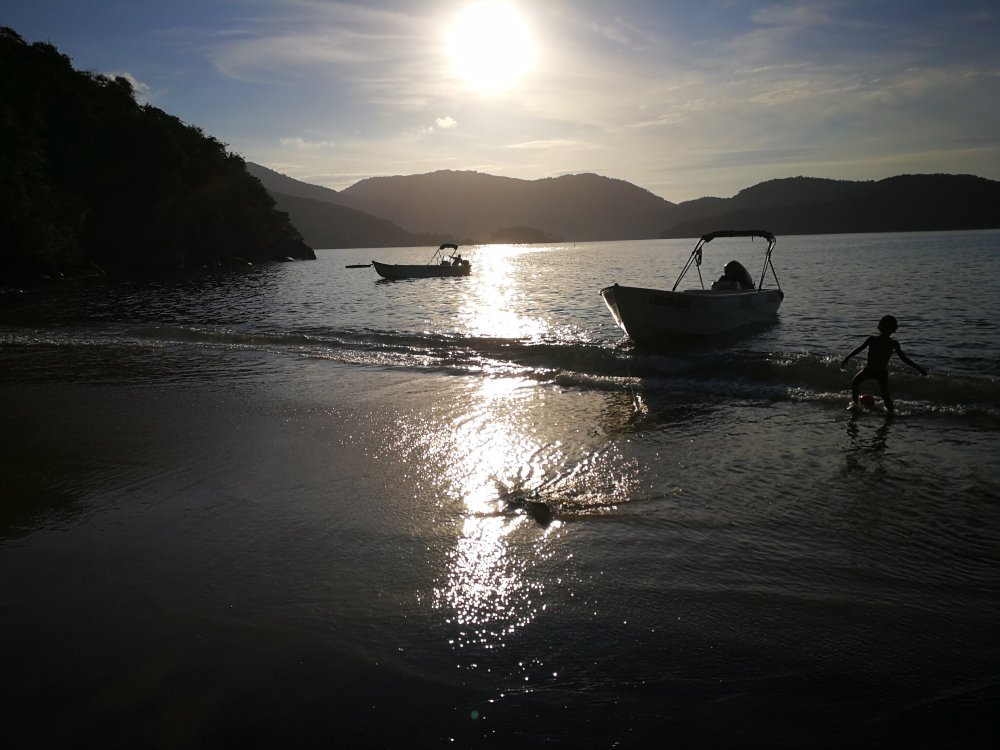 Island Martin offered motivation by telling us the percentage we had conquered so far for those at the back who found the walk difficult. My Martin and I stuck to the front as we didn’t find the hike challenging save for the random branches and logs that seemingly came out of nowhere as our lights lit up only the ground. We reached the summit at 5am and it was cold. The fact that we were all covered in sweat made us even colder as it acted as a magnet for the chill. The sunrise was slow but gave us epic views. This was the first time we had seen the island in the light and it was stunning. The jungle went on as far as the land mass did, completely clothing the island apart from the beaches lining each arc of the coves that made up the perimeter of the island. We sat in awe as the sun illuminated more and more of Ilha Grande for us and we began to realise the vertical drop that surrounded our rock.

The hike down was tougher, as the height of the natural steps down were very large compared to me. Even normal sized people felt the strain in their knees. It was funny to see how little of the trail we recognised having only hiked up in pitch black.

At the bottom, island Martin took the French lads, my Martin and I for breakfast at Kebab House, which for about a fiver gave you all you can eat, and it included cake!

With a quick stop at our hostel and a goodbye to our new friends, pretending to wish them luck in the final, we set upon our next hike which would take us to a waterfall. When we mentioned this, island Martin’s eyes popped slightly out of his head at the lunacy of spending the day hiking as well as all night.

Info: Island Martin’s sunrise pioneers was well worth it. Nobody wants to get up at that time in the morning but once you’re up and have brushed your teeth, it isn’t so bad. We didn’t crash until about 7pm either but less intense people could nap as soon as 10am when we got back from the peak. Some hostels in Rio will offer a transfer to Ilha Grande for 95 Reals or a return for 150. This will include the bus to port and the “ferry” across, which took us 3 and a half hours and we got dropped at our hostel in Rio. People might try to tell you it’s a day trip but they are lying. Ideally you want at least two nights on the island. There are tons of hostels and pousadas around and a couple of campsites too. Wild camping is illegal. During high season it is advisable to book in advance. There are more secluded areas that have private beaches, you can get there via water taxi which give you a proper paradise feel. Lots of taxi boats are available from Abraao.

Product of the week: obviously this has to be Martin’s tour. He was so friendly to everyone and made sure that each of us was okay and enjoying ourselves, providing us with motivation in our native languages. He’s Argentinian so his Spanish is top notch, but amazingly so was his English and Portuguese too! He even spoke a little bit of French. He takes pictures and videos with his gopro, which are included in the price of the tour: 140 Reals (approx £28), which for 8 hours, a climb, a sunrise, free photos and a free video is an amazing deal. The head torch and bamboo stick was included too. 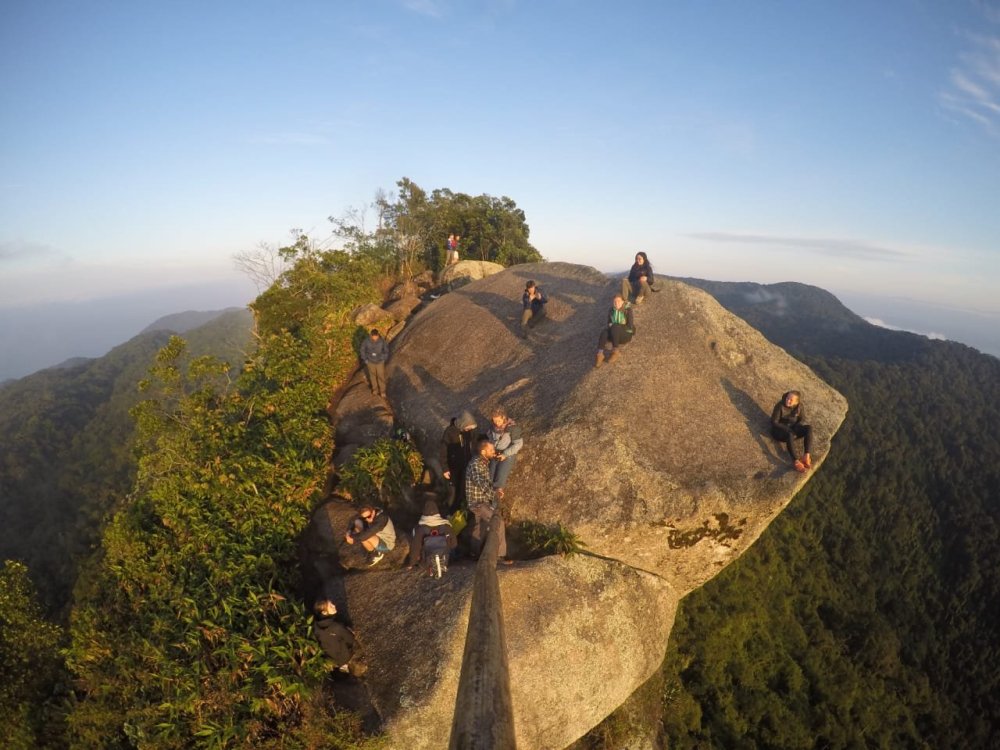 Tip of the week: in this part of the world you need to get your hands on something called Dulce de leche (Spanish) or dulte de liete (Portuguese). It’s milk that has been cooked in a special way that ends up the consistency of Nutella and with a similar taste to caramel. But better. You might have come across it in certain ice cream flavours but that’s not the same. Come to South America for all the amazing things it has to offer but also for Dulce de leche.