I have been to many of the Eastern European countries. They are full of beautiful countryside, friendly people (mostly!), great food and a few surprises. Their history is turbulent even recently, and many locals are more than happy to share their stories with you. On this trip we spent time in Macedonia and Albania with an accidental visit to Kosovo.  We flew from London Luton to Lake Ohrid using skyscanner.net to for our flights, which were much cheaper than flying to Albania or Skopje.

Here’s my story of chasing or being chased by bears in Macedonia, a figment of an over-active and rakija-fuelled imagination

We had spent a day at Lake Ohrid, a beautiful part of Macedonia, exploring the town on foot and the lake by power boat.  Our next stop on this road trip was to Mavrovo National Park, which is in the heart of the Mavrovian mountain region. Macedonia is off the beaten track with tourists so resources for prior research were limited, however, Mavrovo came up in each recommendation I found. I used www.booking.com to secure some accommodation that morning at a ski lodge, despite it being Autumn, called Ski Hut Gorica. We arrived in the small ski town and drove to the end of a footpath to Gorica to be greeted by our friendly host. I must admit I do not recall his name, as I referred to him in my head as Yeti (think Danny from Friends when he got bug bombed). Yeti and his partner had an idyllic lifestyle going on from what I could see; the couple were mostly self-sufficient and running the hostel for extra cash. It was a lovely place and I would recommend staying here.

Once I had dumped my backpack and locked any valuables away (always a sensible idea!), I ventured downstairs to check out the epic balcony view of Mavrovo lake, framed by steep mountains on all sides; it sparkled in the sunlight like tinsel. Enter Miles, a British lad who had cycled his way across Europe via a very indirect route. We compared notes on Macedonia, exchanged stories from when we had each been “Stanning” (travelling across Central Asia [I’ll delve in to more detail in future posts!]), and I eagerly listened as he gave me tips for Albania. One of the best things about not having a rigid plan is the freedom to follow tips from fellow travelers. Miles gave us a stellar pointer to go hiking in the Valbona region of Albania and we loved it!

Miles, Martin and I decided we would take one of the trails up the mountain behind us to nab ourselves a decent view for sunset. The trails around us had been marked in red paint sporadically to the top by none other than our yeti accommodation host. Hail to the mountain. As soon as we set off, we realised we had made a friend in the hostel pet; a puppy called Baloo. She bumbled along behind us as we attempted to follow a trail. Despite the markers, we managed to get ourselves lost a number of times. Luckily, we were all likeminded enough to agree that getting lost is all part of the adventure. We were surrounded by trees, and for all we knew, bears as well. We were in their territory now. 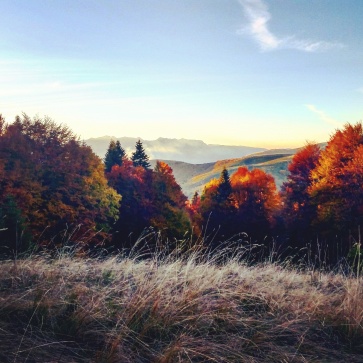 We settled on an opening in the trees at the top of the mountain, and grabbed the beers from our day pack. Baloo was exhausted and seemed grateful for the rest we gave her as we took in the view. We rationed our water out so that she had the energy to get down, and Baloo gratefully lapped it up from our hands before passing out from fatigue on my legs. The trees which densely covered each mountain were a riot of colour, clothed in reds, oranges, browns, and greens, and we watched in awe as the sun turned the sky a dusty pink seemingly for our viewing pleasure. Baloo considerately divided up her attention equally between us as we nattered, observed, and petted.

The way down was certainly more treacherous than the way up. Suddenly, the thought of bears became a concern as we stumbled over steep drops and tree roots in the dark. With one light between us, we half-jokingly warned each other that we’d stick the pirates’ code (whoever falls behind gets left behind) in the midst of a bear attack, and teased each other that dusk was prime hunting time. In our haste to get down, we took a much more direct route which was steeper and involved crashing through bushes and undergrowth, all the while hoping we were heading in the right direction. We’d inadvertently become responsible for this four-month old puppy that didn’t belong to us and wouldn’t leave us alone. The thought crossed my mind that she could be bear bait as the three of us escaped. Fortunately, we did not cross paths with any bears and safely reached the ski hut.

Martin and I went in pursuit of some food. We wandered into town, if you can call Mavrovo Anovi a town, to see whether anything was open. Neither of us are fussy eaters so we would have been happy with a supermarket to use the hostel’s kitchen or a restaurant. The only place that was open was a sizeable restaurant called Mal Odmor. There was a large table set up and reserved, so we thought the quiet ambiance would soon turn into something a bit more happening. Martin and I started to chat with the waiter, the only waiter, a chap called Mickey. He was super friendly and suggested which set meal to go for in order to have the most authentic Macedonian food. I have to say that this was excellent value. We ordered homemade sausage, veal, fried cheese, beer, rakija, and Macedonian wine. The Macedonian wine was delicious.

NB: Rakija is the spirit of locals in this part of the world. I had spent time in the Balkans before (Croatia, Serbia, Bosnia and Herzegovina) and rakija played a key part in that trip too. It is often presented as “homemade” and is a brandy produced from fruit. Sounds nice, doesn’t it? It’s so bad. If you go to the Balkans then you should definitely try it; it would be hard not to, as I have found that most establishments and most people offer it to you constantly and often for free. I have a theory that they are trying to get rid of it. In fact, the rakija we had this night was offered as “on the house if you can do it in one”. Challenge accepted.

I introduced Martin to a game I picked up from some locals in South Africa, called the matchsticks game. It requires an upside-down glass and a box of matches. The premise is you place the matchsticks on the upside-down glass and blow them off without using hands. If you blow them all off, you lose. If you fail to blow at least one off, you lose. We did not have access to matchsticks so got creative with toothpicks and played the drinking game variation. Imagine how terrible a person can be at this game; Martin was worse.

When the only two other customers left the restaurant, Mickey came over and placed two microphones on our table. We saw where this was going. He explained that the reserved table was to encourage others to come in (it had worked) and that he had recently purchased a karaoke machine. As the only people remaining he thought we might like to try it out. Mickey sat with us as we perused youtube for our favourite karaoke songs. We were quite merry by this point in the evening so went straight for the classics. We gave a shocking rendition of Eye of the Tiger, a squeaky singalong to Frozen, and a cringeworthy performance of Wannabe. Mickey was just as guilty in the destruction of these songs as we were, and he was even worse than Martin at the matchsticks game.

We merrily laughed, shouted and sang along to each other’s karaoke songs of choice, but Mickey had the last laugh when he got us singing what he told us was a classic Macedonian song, in Macedonian. Flash forward a couple of hours, with Mickey in the same inebriated state as we were; giggling to inane things and continuing to be spectacularly bad at the matchsticks game, when Mickey’s father and owner of the restaurant enters to be faced with this slightly ridiculous sight. He turned to Mickey and shouted a few things in Macedonian; it didn’t take a genius to work out that he was being reprimanded for getting slipsy with the Brits. We swiftly paid and left.

Our only obstacle between us and bed was the walk through the trees up to the hostel. From experience, alcohol affects people in different ways: I have friends who get aggressive, friends who throw up, and friends who get way too affectionate. The way that the alcohol affected me that night was to make me paranoid. What could have been a casual fifteen-minute stroll through the woods turned into a mission to get us safely past the bears. Martin did not make this an easy feat. He found a yellow and black stiped no entry barrier that he decided he wanted to hurdle, obstinately attempted to do so, and failed. I chivvied him along, with the bears in mind but he wanted to talk about that particular rock we had passed or a specific mark on a tree. Every rustle of leaves in the wind had me whipping my head round expecting to see a bear, to the extent that I pretty much pushed Martin up the hill. Success; we made it to the hostel. We scaled the gate as it would not open in spite of our best efforts and crept into bed so as not to disturb our dorm mates. Mission accomplished.

We discovered the next morning that the gate did open with a little push.

Disclaimer: Yeti was a lovely host. He spoke a number of languages and was super friendly and helpful with recommendations. Gorica was a charming stop on our trip through the Balkans and I echo that I would recommend this as accommodation if you pass through.

Info: I booked accommodation for each place on my Balkan trip that morning. I would recommend www.booking.com

Recommended product: The one light we had between us when coming down the mountain (running away from bears) was Mountain Warehouse 5 LED red and white head torch for an affordable buy and decent battery life.

Travel tip of the week: If you liked the sound of rakija and want to try it, don’t!

Just kidding, we found that Shlivka rakija was slightly less bad than the others.

Other places worth visiting nearby:

Lake Ohrid for stunning views of the lake, opportunities to kayak and rent power boats.

If you  have a car you can drive to a place called Rostushe. From here you can do a short hike to Duf waterfall.

If you are driving into Albania then be sure to stop off in Debar for some excellent pizza at Retro Pizza.